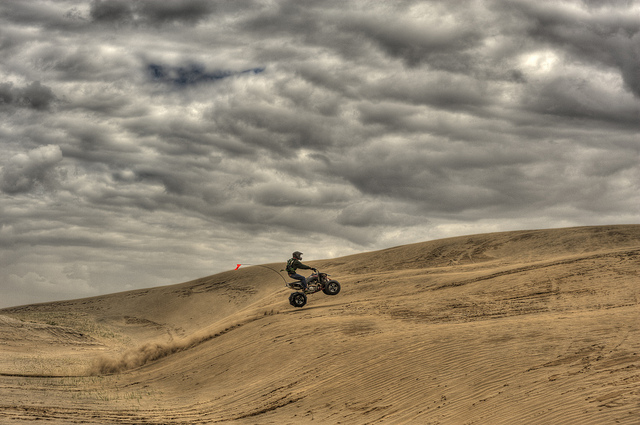 America’s vast expanse of wilderness is full of pristine, natural sights begging to be explored. All it takes is an ATV and a deep desire for exploring the unknown while having plenty of fun along the way. The following locations are just a few that’s worth having on your ATVing bucket list.

Safety comes first on any ATV ride. Before you set off, you’ll want to conduct a thorough check of your machine to ensure it’s in working order. The ATV Safety Institute’s T-CLOC checklist covers all of the essentials, from tires and wheels to the chassis, chain and drive shaft. Alaska is a place that offers unmistakable and untouched beauty, much of which can be seen along the numerous trails throughout the state. The state is home to a number of popular public and private trails, including the Chickaloon-Knik-Nelchina Trail System and the Bird Valley Trail System in Chugach State Park. Other popular areas featuring ATV trails include the 1 million acre White Mountains National Recreation Area and portions of the Denali, Edgerton and Richardson Highways.

Photo of Chugach State Park by swilson3971 via Flickr

The Alaskan trails pose a wide variety of challenges for even the experienced ATV rider, which makes having the right safety equipment all the more important. For instance, you’ll need tires with aggressive tread pattern, such as these  ATV tires from Bike Bandit, to deal with deeply rutted and muddy sections, especially during the spring thaw when the ground is likely to be softer.

Nestled in the rugged Appalachian Mountains of southern West Virginia, this popular trail system gives you an opportunity to enjoy the great outdoors as well as the opportunity to explore a unique piece of American history. There’s over 600 miles of groomed off-road trails through seven West Virginia counties, all of which are open 365 days a year. The Hatfield-McCoy Trails are inexorably linked to the Hatfield-McCoy feud of 1863–1891, as much of the feuding took place in the area. In addition to ATVs, the trail is also open to dirt bikes and utility vehicles, as long as all participants on the trail are properly fitted with a SNELL- or DOT-approved helmet and protective eyewear.

ATV thrill-seekers should look no further than this famous hotspot for ATV riding and motorsports. Oregon’s Adventure Coast notes the recreation area contains the largest expanse of coastal sand dunes in North America, with over 40 miles of coastline and sand dunes rising as much as 500 feet above sea level. It’s little wonder why so many avid ATV riders flock to this year-round area. It’s not just the dunes that make this a shoe-in for your ATV bucket list. The coastal forests and various campgrounds offer plenty of opportunities for hiking, camping, photography and fishing, for starters.

The best thing about ATVs? There’s plenty of space to clip your hammock!