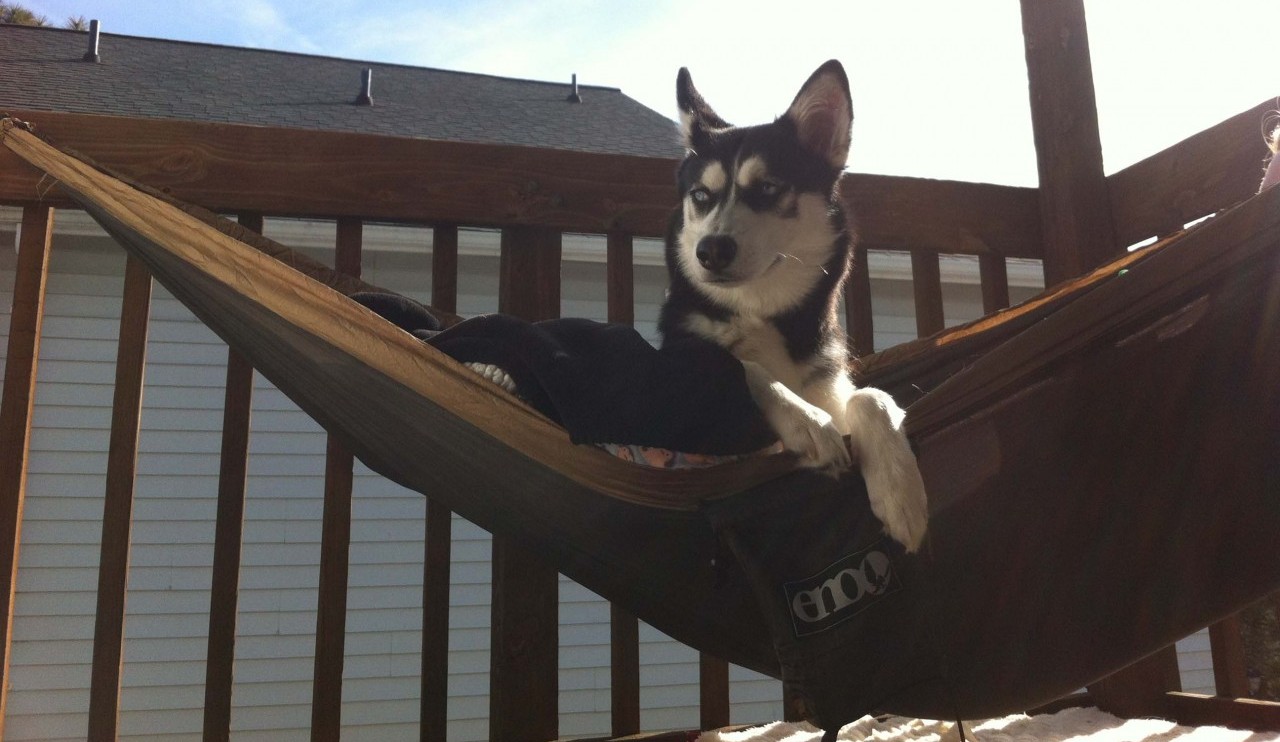 On a recent trip to Alaska, I found myself pondering over the finer points of adventure—this is always a good sign that your trip is going well. I’ve had thoughts like these before. Usually, they drift into my mind after a long day of awesomeness. Sometimes they find me while I’m staring into the flames of a campfire. This time, the thought sprang into my mind right after a chocolate lab named, Nali (short for Denali) bolted out from the brush and onto the trail—nearly sending me over the handlebars of my mountain bike.

A friend of mine had invited me to join his family—and his dog—to go rock climbing in Archangel Valley. The destination required that we bike in on a dirt road, then hike down among a series of small lakes and streams where a nice little top rope situation was waiting for us. Nali, on the other hand, didn’t care what we had planned. She had her own adventure to find.

As I watched this playful animal dart in and out of the ferns and fireweed that grew along the trail, I couldn’t help but notice how much fun she appeared to be having. This kind of behavior is fairly normal for dogs—running along side you one minute, then darting out to chase a marmot or a ground squirrel the next. Still, the whole thing got me thinking.

Watching Nali made me realize how differently I usually do things on my own adventures. I tend to plan extensively. I have a specific destination in mind and usually a fairly set time to reach it. I don’t often vary from the plan—I accomplish what I set out to do. Nali’s way is different. She doesn’t seem to have any plan at all. Her destination changes as soon as something else seems like a better idea. And the emphasis isn’t on the future, but on the present.

Having a set plan ensures a certain degree of safety. Setting specific goals for a trip can be valuable too. But sometimes its nice to let your ‘inner Nali’ lead the way. To me, it seemed a good enough idea that I gave it a try the very next morning.

I left early and headed up to a place called, Summit Lake, in Hatcher Pass  This was the only destination plan that I allowed myself for this particular experiment. The whole area was blanketed with a thick fog which served as a helpful reminder to enjoy what was immediately around me instead of setting my sights on a distant peak or ridge line. Once I my pack was on my back, I tried my best to let go and let things flow.

I walked along the lake for a while and noticed the glassy surface and the reflection of the dark, jagged rocks and boulders. I saw that the surface wasn’t completely still. Subtle ripples on the surface led me to a stream. I followed it. The stream tumbled down between moss-covered boulders where tiny flowers grew. I sat on a rock and watched the water for a while. I listened to it.

Then the fog began to shift some, and a large boulder at the top of a ridge was revealed. I went to it. From there, I watched the sun’s first attempt to pierce through the fog. I noticed how much color it brought each time it found its way through to fall upon one of the nearby hillsides.

Nothing significant happened on my wandering hike, but it was beautiful, calming, and deeply satisfying. This isn’t the way I’ll go about things every time I get out into the wilderness, but it proved to be nice change of pace for me and it’s something I’ll definitely do from time to time.

I highly recommend giving this a try. Bring your hammock along, but don’t feel like you have to hang it—only if the moment calls for it. Keep things simple to avoid dangerous outcomes, of course. For example, if you head off into the Mojave Desert with only eight ounces of water, your ‘inner Nali’ might lead you to an early death (which isn’t the kind of experience we’re going for here). The point is to let go a little, to enjoy what’s around you, and to breath in what’s happening now. There are great lessons to be learned from this simple exercise that extend into all aspects of life.

ABOUT RYAN SAUNDERS: I’ve lived most of my life in Alaska, but am currently living in the desert of Arizona just to mix things up. I love the outdoors in all its varieties and I do my best to seek out adventure and awesomeness wherever I am.