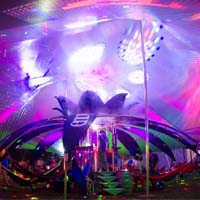 Representing the first of its kind, ENO’s Lotus Lounge wowed audiences and impressed organizers in its first organized event.

Highland Brewing Company, the hosts of the party, hold regular events at The Meadow – their onsite event space – but were impressed by the magnitude of the Lotus Lounge debut.

“We have really good crowds out here, and we’ve done a few festivals but we typically don’t do those after 11 p.m.,” said Grant DaSantos, Highland Brewing Company’s Hospitality and Tasting Room Manager. “This was the first thing we did that was DJ-oriented with crazy lights, and it looked really neat. It was really neat for anyone who didn’t know what was going on.”

Representing the first of its kind, the Lotus Lounge boasted over 100 hammocks across the party area, both attached to the Lounge and hung from ENOpods, ENO’s patented, portable, hammock hanging stands. A large tent covered the event, housing a 5000 watt sound system, professional lighting, and an innovative DJ booth at the center of the Lotus Lounge. The result was a seamless integration of relaxation space and kinetic vibe.

“The vibe went really smooth and we’d like to do it again,” said DaSantos. “People want the Lounge to be a part of what they’re doing. The word is out, and I think it will be very positive to any festival.”

Due to the success of the Lounge’s debut, ENO foresees the entertainment structure to be on tour full time for the 2013 and 2014 Spring/Summer festival seasons.

“Our fans have been faithful for years and it’s our way for us to give back,” said Peter Pinholster, co-owner and president of ENO and the brains behind the cutting-edge structure. “We’re always trying to give just a little bit extra.”

For more information on the Lotus Lounge, or to request a free Media Guide, please email mail@eaglesnestoutfittersinc.com.