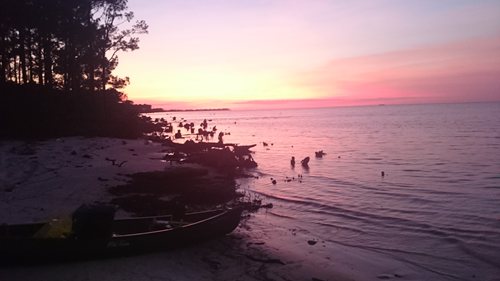 Note from ENO: As a co-sponsor, we will be following Trevor’s adventure on the Alabama Scenic River Trail over the next few months. This is the ninth chapter of his story.

People of the River

Along the trail I met ENO hangers, Old Town paddlers, river angels, and river strangers. I met a tourist in Fairhope, Alabama who paddles the same canoe as me when he goes on extended canoe trips back home in the South of France! When I explain to people what I am doing they either think I am crazy or think I am “living the dream.”

No matter what people’s opinion of my mental health status was, they offered a helping hand. Sometimes I was offered a cold drink, sometimes a ride or sometimes something as simple and delicious as a fresh tomato from their garden, a gift that makes all the difference while camping on the river. Like John Fogerty said in his song, “Proud Mary,” “people on the river are happy to give.”

Another thing people had to share was their story. My favorite part of meeting new people is hearing their stories and gleaning insight and wisdom from their life experiences. Sometimes the stories I hear are from long ago and sometimes they happened recently. I appreciate a big fish story just as much as I do a story founded in cold hard facts. No matter what the stories are, they share a common thread: passion. These stories allow me to have a glimpse of the river through their eyes. To share their passion for their section of the waterway and all the history that surrounds it. This gift of shared insight is invaluable and something I enjoy no matter where I travel.

History Along the Trail

To paddle the Alabama Scenic River Trails is to take a journey through history. The waterways used to be the preferred route of transport, and Alabama is full of navigable waterways. The river trail is split into two historic transport routes. The almost impassable rapids at Wetumpka cause the river to be split into these two sections.

The upper section stretches from Rome, Georgia to Wetumpka, Alabama. I passed beautiful confederate era masonry at the locks below Neely Henry Dam and lots of old train track bases of similar construction. At Hoke’s Bluff I heard stories of a sunken steam ship filled with confederate payroll that went down while fleeing Union General Sherman’s attack on Rome, Georgia. I was told stories by old timers of how the Coosa was before the dams went in during the 1950s.

The lower section stretches from Montgomery to Mobile. The Alabama River starts at the confluences of the Coosa River and the Tallapoosa River. At the confluences rests the remains of Fort Toulouse, first established in 1717. I passed the site of the Battle of Holy Ground, where the lower creek Native American religious group Red Stick believed they were protected from bullets at their sacred site.

While paddling past the city of Montgomery I was buzzed by low flying helicopters and Air Force cargo planes as I paddled past Maxwell Air Force base. Maxwell was built on the site of the first commercial flight school in the United States, owned by the Wright brothers.  The trail ends at the remains of Fort Morgan.

Plants on the River

After a small sampling I decided it was safe to eat. For breakfast on the last day of paddling, I cooked up some fresh caught blue crabs with Beach Rosemary and a little oil. I ate it on my instant grits. Pretty good!

An Indian herb that has naturalized in tropic and sub-tropic areas around the world, it is used internally to increase circulation to the brain and acts as a general nerve tonic. Used topically for treatment of scars, among other things.

The End of a Journey

From the foothills of the Appalachian Mountains to the Gulf of Mexico, this has been an amazing journey! I have met new plants, new friends and have developed a new appreciation for the Southeast. I have received an outpouring of support from friends, family and even strangers. When I began this journey I never imagined that people would be interested or supportive of my mission to canoe and study the native medicinal plants of Alabama.

And study the plants I did! Even though I lost the botanical identification photos from the first half of my journey, I still met those plants and was able to experience their medicinal effects in the field. I was able to make extracts of some of these new plants, and I will be able to continue to experiment with them. This is how an herbalist adds new medicines to their materia medica, usually minus the canoeing.

Some people embark on such a journey for an adventure, a challenge. Others want bragging rights, to have something that “no one can take away from them,” as I was told repeatedly. I paddle for the love of the plants, to move slowly through the many ecosystems of Alabama and take note of the many medicines growing in our woods.

I come away from this trip knowing our Southeast woodlands and rivers more intimately. Having learned from the biochemical factory contained within each plant, I come away wiser to the ways of nature and with a greater repertoire of medicine to use to help ease the human condition.

And for that I am grateful.