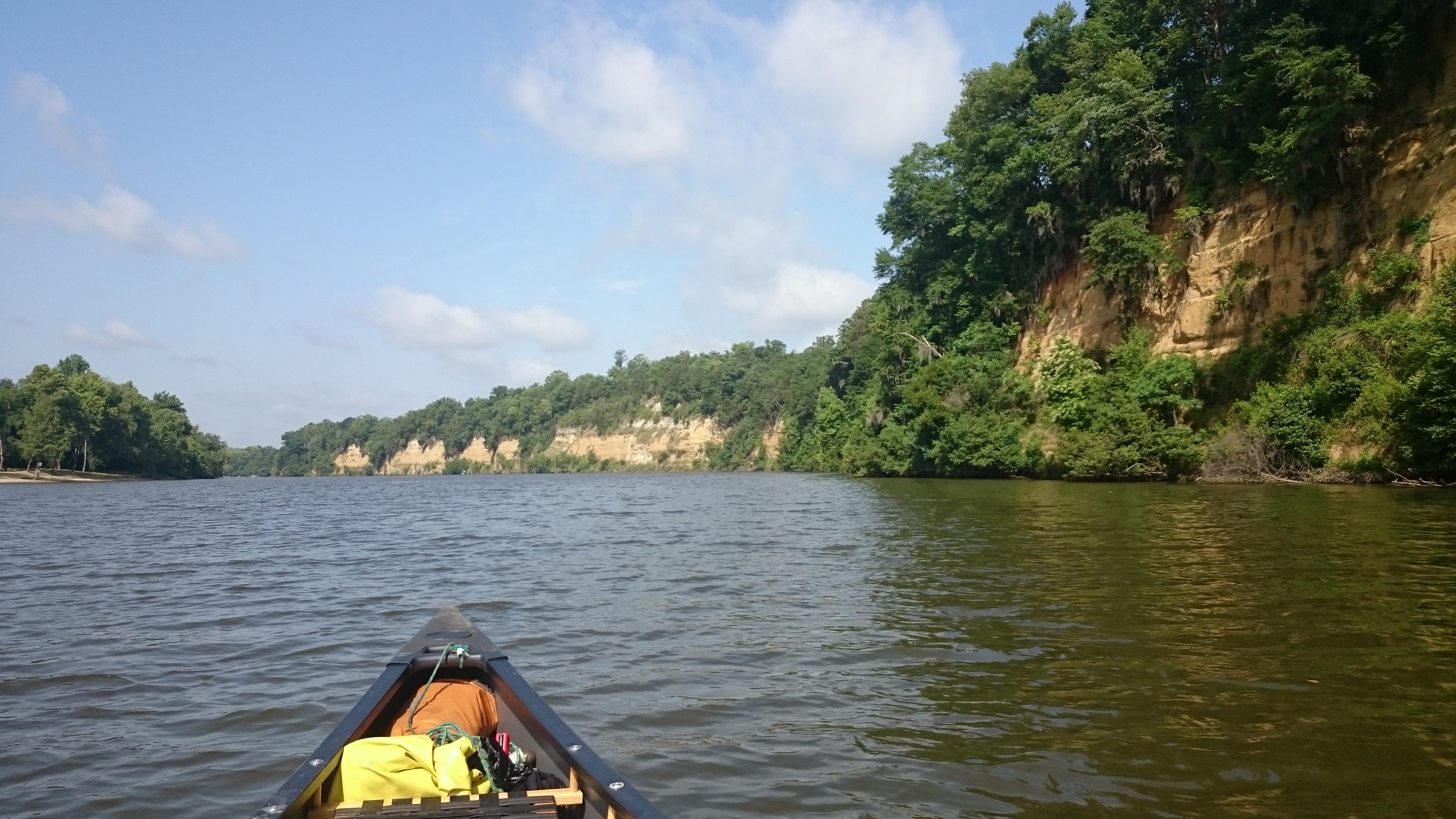 Note from ENO: As a co-sponsor, we will be following Trevor’s adventure on the Alabama Scenic River Trail over the next few months. This is the seventh chapter of his story.

The End of the Coosa

Well, I’ve made it to the Alabama River!  Coosa Outdoors outfitter and trail angel Lonnie Carden picked me up at Jordan Dam and drove me and my gear to his river property, The Dirt Farm.  He set me up with a covered area to hang my hammock and it even had electricity and fans!  There was clean water nearby too – high living, compared to how I’ve been camping.

A group of friends came down to camp and paddle with me.  Lonnie dropped us off at the base of the dam so we could paddle the rapids at the end of the Coosa.  I made it down Moccasin Gap, a class III rapid, fine, but I flipped on one of the smaller rapids.  My “waterproof” phone, which was supposed to be able to submerge for 30 minutes, got wet and died.  I have insurance so I got a replacement, but I lost all my pictures.  Sadly, I had been relying heavily on cataloging plants with my phone camera.  A months worth of work, over 150 species of plants, gone!  Now I’m trying to focus on cataloging South Alabama’s medicinal plants and recapturing any repeat plants.  The ecosystems are changing though, from Applachian foothills to Alabama’s blackbelt.

I have had good success fishing on the Coosa.  I caught crappie, yellow catfish, and lots of aligator gar.  Damn aligator gar!  I almost caught a good size striped bass too, but it fought hard and won.  It snapped my fiberglass rod in half and that was the end of my reel fishing, until my buddy brought me a replacement.  For the week without a reel, I used a pole I made from a Sassafras sapling with a bobber on the line.  All I managed to catch with that sapling were crappie.  One night I set out my sap pole with a larger hook than I had been using and a live crappie on it. I awoke the next day to find my pole gone! I guess that rig change was the ticket to catching a bigger fish.

While waiting to get picked up from Jordan Dam, I met someone noodling for yellows along the boat launch.  I have noodled once before and talked with one man about it.  He set me up with noodling gear and gave me two big yellows!  Because I forgot to pack a filet knife, I ended up cleaning them with a scalpel from my first aid kit. I really need to buy a filet knife! My friends and I had a riverside fish fry after paddling the rapids.

A pain in my… Hands.

My biggest challenge has been flare ups in my peripheral neuropathy.  In my everyday life, I have it under control with supplements.  Due to the repetitive motion of paddling it has been flaring up.  The neuropathy in my hands accompanied by joint swelling has been so bad in the mornings I can barely hold a spoon.  So I’ve started preparing my breakfast the night before.

Lucky for me, the burning in my hands is not as strong as the passion I have for medicinal plants.  As someone has probably said in the past, the expedition must go on.  And since my expedition has a crew of one, I’ve had to man up and push onward.

Used to treat anxiety and to relieve muscle spasms.  Can be used for restlessness.  Has been show to work on same receptors as the benzodiazepine class of drugs.  Also contains small amounts of MAOI constituents.

Gorgeous flower that grows in the river shoals.  When the dams went in we lost most of the stands of this plant on the Coosa.  Not medicinal.