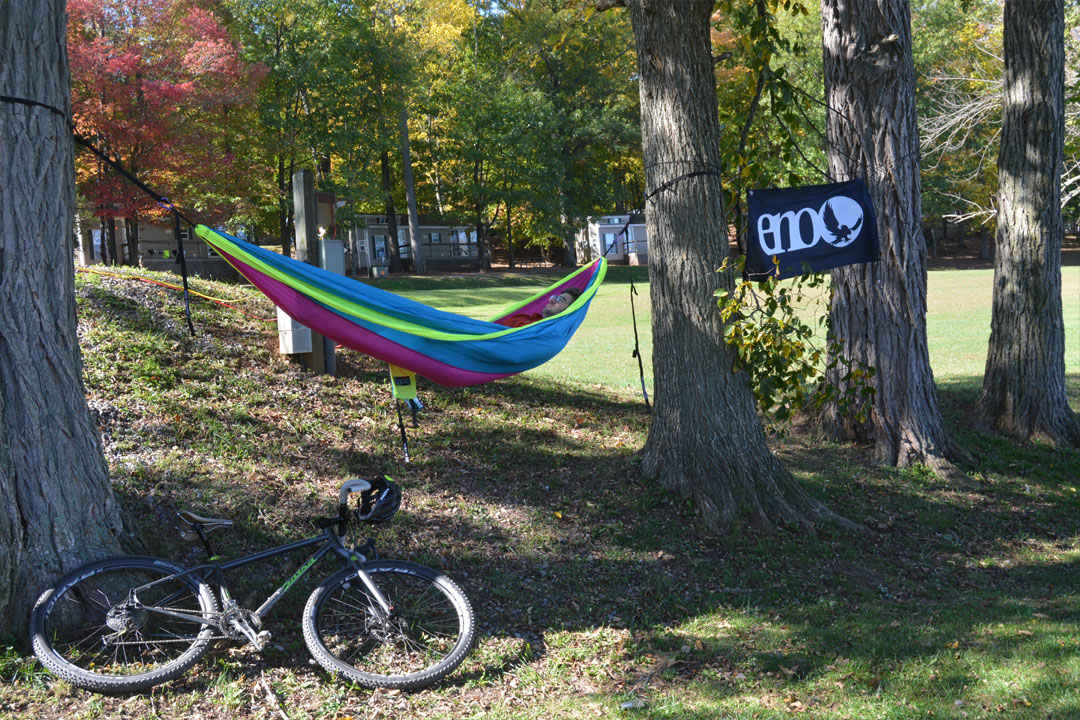 When I first heard of Adventure Fest, I was skeptical. Long bike rides, partially supported but not led. No planned clinics, not a lot of structure of any nature to speak of. There was a strong feeling of “if you build it, they will come.” It was a leap of faith in cyclists’ willingness to get together for a shared experience of a fairly individualized sport, and was certainly putting a lot of optimism in the sky, in a region that only has sun for 45% of its daylight hours.

When I was asked to be an ambassador for Thick Bikes, where I work, I cautiously said yes. When Swift Industries, a sponsor of the event, invited my bike shop to share tent space and come up with a way to represent what we envision as the best of freedom on two wheels, we jumped at the idea and knew it was going to sweeten the festival; if nothing else, it’s more fun to show up to a party with a pal. I know the folks at Bicycle Times, the publication behind Adventure Fest. Their sister publication, Dirt Rag, puts on a similar event, Dirt Fest, at a nearby campground. Dirt Fest, however, is more developed, with group rides, skill clinics, events, and more bikes to test ride than there are hours of pedal time in a weekend. Adventure Fest, by contrast, celebrated the autonomy of the bicycle, the ability to ride (almost) anywhere and do (almost) anything, without the need for special skills and fanfare.

In the spirit of “if you build it, they will come,” I invited Eagle Nest Outfitters to send some hammocks for people to lounge in and borrow, to try and set up themselves. Most of us at Thick use ENO hammocks for our bikepacking set-up, because in Western Pennsylvania there are more trees than flat ground, and hammocks are much lighter and more compact than most tents so they fit easily in a frame pack. I noticed a few hangers already spread across the camp grounds, with impressive ENO setups to compensate for the dropping evening temperatures of early October in Pennsylvania. Others had never even considered a hammock as a means of sleeping or relaxing mid-ride.

After the first rainy day, the weekend’s weather was perfect, and the leaves of central Pennsylvania were popping with reds, purples, and oranges. Raystown Lake was still in the morning, save for occasional waves rippling from a passing boat. We set up the hammocks next to the bags decorated with Swift Industries bags, and invited passers by to stop by for a swing.

At first, people were hesitant. We were next to the coffee stand, though, and after some caffeine and a few minutes watching the Thick Bikes clan taking turns relaxing, one by one people stopped by to say hello and ask to lounge around for a moment.

On Saturday afternoon, I went for an 18-mile mixed surface ride with my husband and another Thick Bikes ambassador, a student at Carnegie Mellon University’s mechanical engineering program who races on her university cycling team. There was a lot of climbing, 2,000 feet in the first ten miles, and I was glad to have my brought my new Salsa Cycles Fargo. For anyone interested in bikepacking, this is a wonderful bike that is comfortable for long distances; it can climb hills like a mountain goat and even with the rigid carbon fork I have, it maneuvers off-road terrain as if it had suspension. It is like an SUV in bicycle form.  The steep climbs were well worth it the sweat for the surprising views of the valley below, and the rushing descents that brought us down to the lake and along the water before directing us into another climb through farm country. We rode past horses, then mules, then donkeys, then miniature donkeys, then baby miniature donkeys, which look more like hooved cats than something that could pull a cart. A friend from West Virginia remarked that Pennsylvanians love miniature animals, and none of us could deny it, but rather wondered what was to possibly dislike about the adorable little animals.

At night there was a party with jam bands, beer, homemade pizza, and lots of good conversation with like-minded people and old friends. As temperatures dropped, we gathered under pop-up tents and near camp fires, amazed at the folks by their big RVs who had brought out their flat screen TV to their own fire to watch the football game. With all the stars in the sky, the smoke and flame moving like bellydancers to the slight motions of wind, and friends’ faces lit in the warm glow of fire, lantern, and moonlight, what more could a television offer?

While there were certainly kinks to work out, I think Adventure Fest had a great inaugural year and will prove to be a welcome addition to the fall lineup of outdoor festivals. They built and we came, so now we just need to build it stronger together.

ABOUT: Carolyne Whelan is an adventurer and freelance writer who usually hangs her hat in a camper. When she isn’t working as a bike mechanic in Pittsburgh, PA. Her poetry can be found at carolynewhelan.com.