by Foghorn Labs April 11, 2016
Hammocks are great. They’re comfortable, relaxing, and portable! But what if I were to tell you there’s more to a hammock than just their serene qualities? Recently, I discovered some new and exciting uses for my hammock. I like to call them “Hanging Games”. Hanging Games are exactly what they sound like: fun games that incorporate your hammock gear! This blog explains an ENOpian’s twist on popular games that are perfect for team building, camp, or any group looking to get out and have some fun. So read up, grab some friends and have a hammock showdown!

This is one of my favorite Hanging Games! Here is what you do: Gather some friends, split everyone into teams of about 6-10 people; each team will need a hammock. The point of this game is to get your whole team from the starting line to the finish line. What makes this game fun is that the only way for team members to get to the other side is to be carried in the “chariot” (hammock). Only two team members can carry the chariot at one time. The winning team is the one who gets all the team members to the other side first!  Ready, Set, GO!! 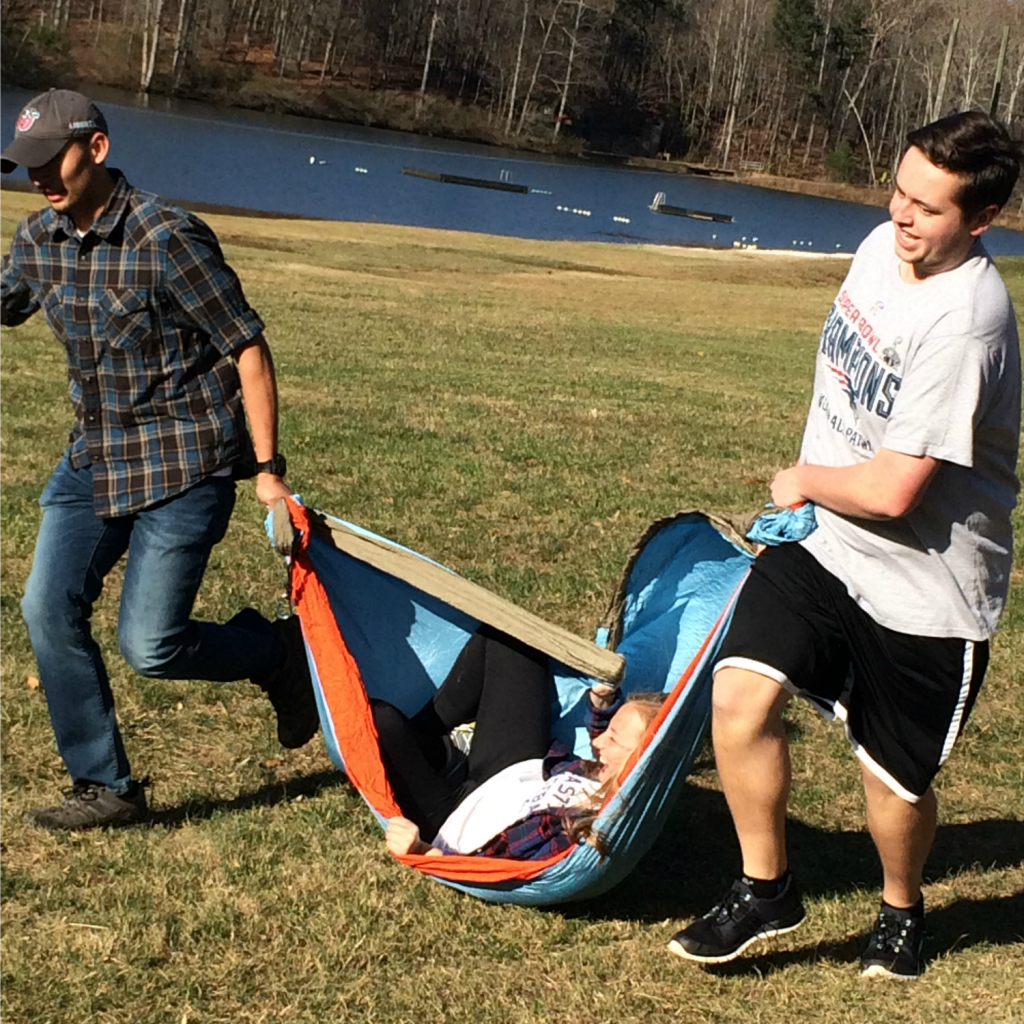 This game is a familiar, but playing with hammocks is even more fun than any normal musical chairs game. The last time I played musical hammocks with some friends it was intense, but so much fun! So hang the hammocks low to the ground and be careful! The same rules apply to musical hammocks as in regular musical chairs: Hang the hammocks in a circle (one less hammock than the number of people playing), get somebody to handle the music, when the music is going you walk/run in a circle around the hammocks, and then when the music stops GO! Get in a hammock!!!!! The person who does not get in a hammock is out. You then remove a hammock and continue the process again until you have a winner!

This is another familiar game, but it wouldn’t be so popular if it wasn’t fun! Grab your SlapStraps or Atlas Straps and depending on how many people you have, you may need to attach two or more together. Lay a hammock down on the ground to mark the center line and start with the strap’s center hovering over the line. Then teams grab their side of the strap and pull! The first team to cross over the center line loses!

While all the Hanging Games are fantastically fun, this one is hands down my favorite! IT IS SO MUCH FUN! Split your group into two even teams and each team will stand in a single file line. Next, each member of the team needs to be tied together or holding on to a strap. (Once everybody is tied up you should be in a single file line , making up the snake or dragon) Once the two “dragons” are formed, it is time to start the game! The point of the game is for the head of the dragon (first person in line) to place a sticker on the tale (last person in line) on the other team’s dragon. The first team to place the sticker anywhere on the tale of the opposing dragon wins! Make sure to work together as a team while you run around and think of strategies for both offense and defense! 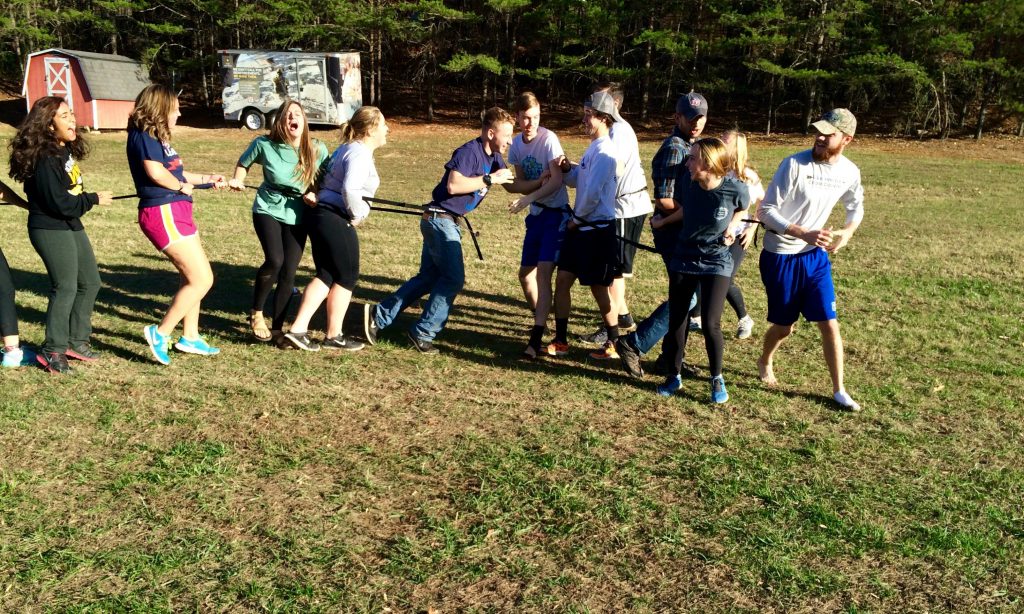 Have you ever seen hard core athletes who train with parachutes behind them for the extra challenge? Well that is basically what you are going to be doing for this game. Split into teams; each team will need a hammock. Two team members will run at one time each holding a side of the hammock as it parachutes behind you. Run with your partner to the finish line, drop the hammock and grab your partner’s arms, lean back, and spin around 10 times. Then pick up your hammock and run back passing it on to the next members of your team. (If you have an odd number of people on your team the last person can run solo and perform the same tasks of parachute running and spinning.) The winning team is the first to have all it’s team members complete the relay race and sit down! Ready! Set! GO!! 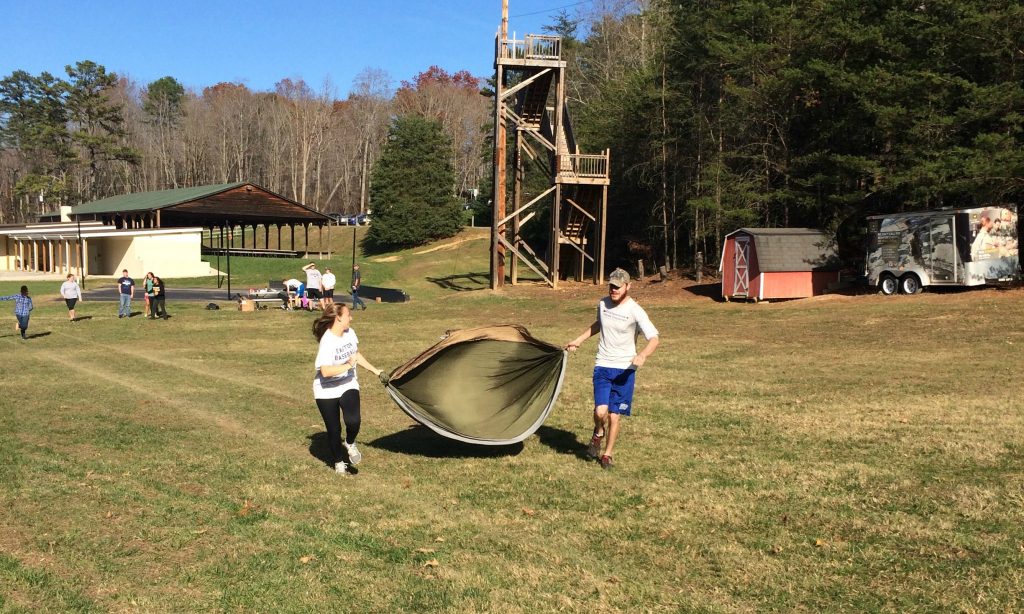 The last game idea is a fan favorite called Mummy Role! First you need to split your group into teams of 7-10; each team needs their own hammock. Then you need to assign each member of your group a job: 1 Wrapper, 2 Rollers, and the rest of your team are mummies. One mummy, the wrapper and the two rollers should start at the finish line; the other mummies should be lined up at intervals between the start and finish line. When the game starts the wrapper will run with the hammock, wrap the first mummy up, and lay them on the ground; after the wrapper is done with this task they will run to the next mummy and wait. As soon as the mummy is wrapped, the two rollers can begin rolling her to the next mummy in line. When the rollers get to the next mummy, the wrapper un-wraps the first and then wrap the next mummy like before and then the process continues until the last mummy crosses the finish line. The first team to complete this wins!!!! Now ROLL AWAY! 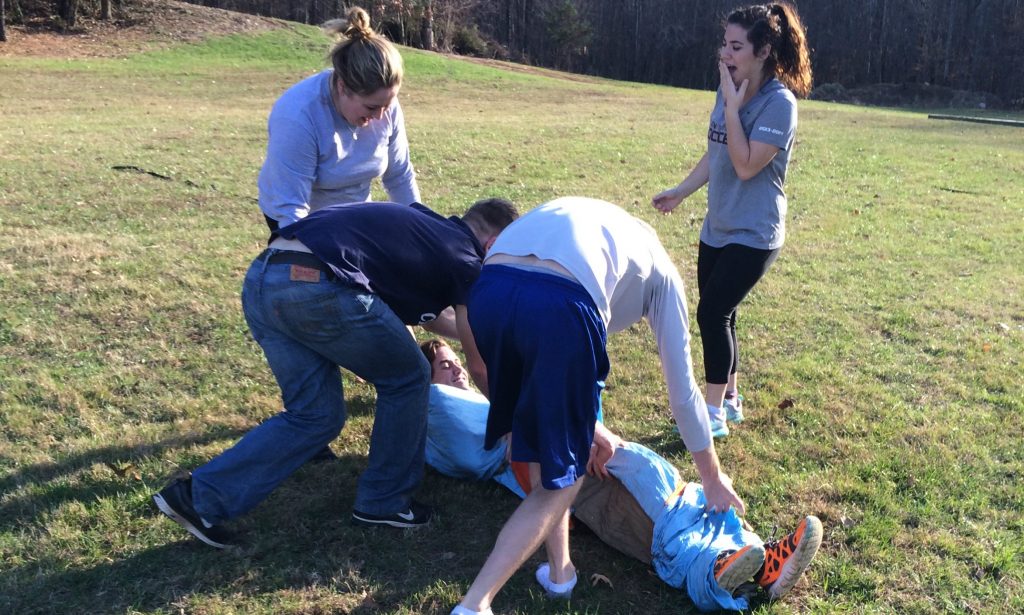 Now go out and grab your friends to try these crazy fun hammock games and discover the competitive side of your relaxation gear! Host a Hanging Games event at school, camp, or any outing. Come up with your own hanging game ideas and share in the comments section below! Have fun, stay safe, and Happy Hammocking!