If You’re Happy and You Know It, It’s Probably Because of an ENO Hammock

Home
News
If You’re Happy and You Know It, It’s Probably Because of an ENO Hammock 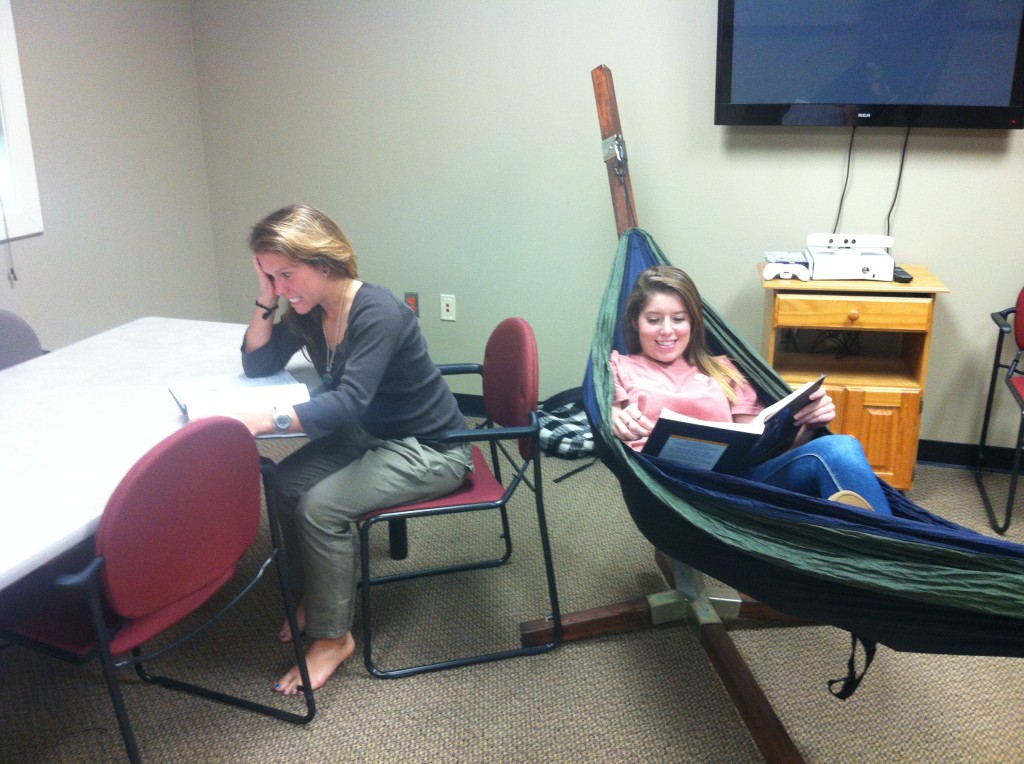 In the third part of a hammock study series by Lyon College’s Psychology Department, hammocks were found superior than office chairs for boosting moods and emotions.

School has begun, but does that mean studying in hammocks should too? Eagles Nest Outfitters (ENO,) the leading provider of ingeniously crafted parachute hammocks, and Lyon College think so. In the third part of a series of studies examining student’s moods and emotions while completing cognitive tests in, and out of, a hammock, they found studying in hammocks reduces negative emotions and increases relaxation.

The experiment, developed by Lyon’s Psychology faculty, surveyed approximately 40 participants during the 2014 spring semester. The participants were administered a survey assessing their current emotional state and level of relaxation, and were then randomly assigned to either an ENO hammock or an office chair. They then studied for 15 minutes using identical study guides before being assessed again for relaxation and emotional levels. Finally, the participants completed the cognitive tests they studied for (seated in an office chair) and were assessed for a third time on their emotional state and level of relaxation.

The final data, collected by Lyon College students serving as research assistants, found remarkably similar results between the desk chair/hammock group’s cognitive tests, but differed in the groups emotional and stress levels. During their second assessment, the hammock studiers had significantly higher levels of relaxation and positive emotions than their office chair comrades, who reported no change.

“As my colleague Jenn Daniels would say, these are the ‘sexy findings’,” commented Patrick Mulick, Associate Professor of Psychology. “Both groups reported high levels of academic stress and moderate levels of positive and negative emotions prior to the test. Afterwards, only the hammock group noted a difference.”

In addition, there was no change in the hammockers’ emotional state or level of relaxation between the second and third assessments, which means less negative emotions, more positive emotions, and more relaxation were maintained all the way through the completion of their cognitive tests. Once the subjects were relaxed, they stayed that way.

“I think we all know a student, or have been a student, who finds it hard to relax, especially while studying,” said Adam Cohen, ENO’s Sales Manager. “As the boom of hammocks on campuses is here, it’s great to know that overall, they’re contributing to a positive way of life for these schools.”

Armed with this excellent evidence of self-reported positive changes from spending 15 minutes in a hammock, ENO and Lyon’s college will go back to the books a fourth time examining a hammock’s effect on social bonding and relationship building.

Lyon College is a community distinguished by its academic curriculum, unique Honor and Social Systems and award-winning professors. As one of the premier liberal arts colleges in the South, Lyon strives to create a learning environment that is not only academically challenging, but one that is indicative of building character and integrity. Lyon College is also the first College or University to house ENO Campus Hammock Lounges that encourage hammock use among the student body.