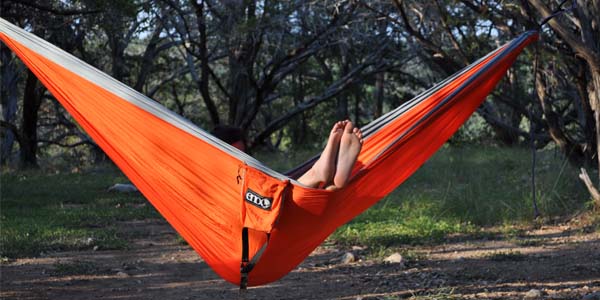 Today, we celebrate the symbol of absolute comfort, the reason to slow down and take it easy during these warm summer months, and the best piece of indoor/outdoor furniture ever:  the hammock.

July 22nd is National Hammock Day, and we’re celebrating all day long! With summer in full swing and leisure at the forefront of everyone’s minds, what better way to enjoy the Dog Days of summer than kicking back in a hammock? To anyone who has experienced the fantastic peace and serenity that is a hammock, it’ll come as no surprise to know that centuries ago, folks were peacefully snoozing away in these relaxation slings. The hammock has a pretty rich history, from its indigenous origins to its military and prison system purposes to its present-day identification as an outdoor relaxation staple.

Anthropologists believe that as far back as 1000 years ago, the hammock got its start thanks to the Mayan Indians of Central America. The Mayans and other indigenous people created the earliest ones out of woven Hamack tree bark or fibers from the Sisal plant. When Columbus and his conquistadors arrived in the Bahamas, they became the first Europeans to encounter both the Taino people and the hammock. When they saw how widely-used it was, they brought several back to Spain. Over the course of the colonial era, Spaniards and other Europeans began experimenting with cotton, canvas, and other cloths brought over from the New World to craft hammocks like the ones they saw on their journeys. These suspended beds became the preferred sleeping system because they kept the explorers off of the dirty ground; offered protection from snakes, rodents, and other bothersome creatures; and had a soothing swinging motion.

The Spanish historian and writer commonly known as Oviedo came to the Caribbean island Santo Domingo in 1514. He described his introduction with the “hamaca” in his account, La Historia General Y Natural de las Indias:

“The indians sleep in a bed they call an ‘hamaca’ which looks like a piece of cloth with both an open and tight weave, like a net…made of cotton…abot 2.5 or 3 yards long, with many henequen twine strings at either end which can be hung at any height. They are good beds, and clean…and since the weather is warm they require no covers at all…and they are portable so a child can carry it over the arm.”

By World War I and World War II, the design of the hammock had been significantly altered. Because the military, namely the Navy, became the ones primarily using them, the focus became more on convenience, portability, and space saving. Heavy canvas about 4 inches wide was used for these naval hammocks. Breezy, comfortable hammocks became nonexistent in the military world. Instead, sailors had to sleep on small, cramped, less ventilated pieces of itchy fabric.

In the 19th century, the prison system in Britain adopted the hammock in an attempt to replace jail cell cots. They used large brass hooks and rings to attach them to the walls of the cells, not thinking that these hooks and rings could be used as some sweet makeshift weapons! However, this was soon discovered and the wardens got rid of the hammocks altogether.

Meanwhile, Turn-of-the-Century America was using hammocks as both a recreational product for wealthy families and a practical bed for frontier farmers. In 1889, the first known mass producer of hammocks opened its doors in Pawleys Island, South Carolina. Since then, hammocks have been developed and improved in terms of design, materials, and comfort. Today, more than a million hammocks are sold yearly in North America, and more than 100 million people use it worldwide!

Who knew that the ideal embodiment of relaxation is actually one of the oldest pieces of furniture in the history of mankind? Just another reason why hammocks are AWESOME!!