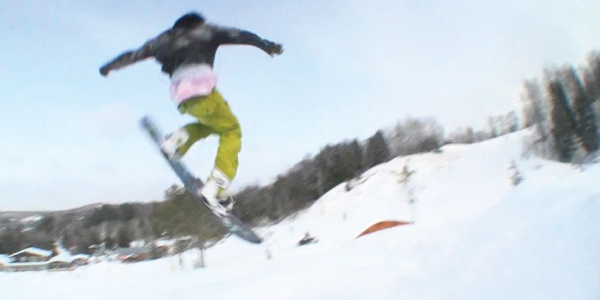 **Note from ENO:  Snowboarder Kai Sandal reps ENO while doing his thing in Duluth, Minnesota. He and his snowboard crew ride and film in the Northern Minnesota area.**

“My name’s Kai Sandal, I’ve lived in Duluth, Minnesota my whole life. Eight of twelve months during the year the temperature is below 50 degrees, and six of those months the ground is covered in snow. Me and a couple of my friends snowboard for a local snowboard and art company based out of Northern Minnesota, Jambox Shred Gear. I also snowboard for a rad hammock company, Eagles Nest Outfitters. Four years ago a snowboard shop that my friends and I rode for called Freestyle of Duluth that had been around for more than twenty years went out of business, but that didn’t stop the team from riding and filming everyday. The crew consists of Colton Allen, Colton Maddy, Danny Spooner, Rocco White, videographer Travis Doyle and myself.  We mostly ride two local mountains; Spirit Mountain and Mont du Lac as well as search Minnesota streets for gnarly rails and gaps. The hills are about 15-30 minutes away. Spirit Mountain is the original snowboard park around these parts, but in the last two years Mont du Lac has invested lots of money and time into building a top notch park. They bought a 20 mph tow rope that allows the rider to get 30+ laps per hour. While this is an innovation to perfecting tricks, it also exhausts you in two hours time. This is where ENO comes into the sport. While my friends might have to go home or into the chalet to rest, I bring my hammock, quickly attach it to two trees, hop in and give myself a break. “Never have to leave the hill”. My hammock has allowed me to stay on the mountain longer than I ever could have. I sit back, watch the locals take laps, pull crazy tricks, and progress. This inspires me to strap back in and work on my next new trick.

‘I know that if I scare myself once a day, I’m a better person.’- Laird Hamilton

Eagles Nest Outfitters introduces hammocks to extreme sports and helps me recoup while on the hill. Most people think of hammocks in summer, but in Duluth we hardly have a summer. As long as you keep your boots and jacket on, kickin’ back in -10 degree weather and feeling comfortable is something to brag about.”

Check out these sweet videos that Kai and his snowboarding crew have created!