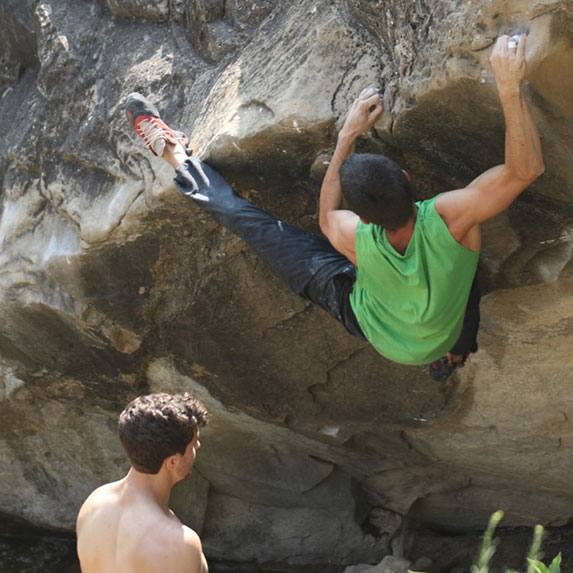 What if I told you rock climbing is a great way to relax? But wait, that can’t be right. Rock climbing is an Extreme Sport! It’s all about the adrenaline, the danger the crazy heights; you know, the opposite of relaxation; many people see rock-climbers as adrenaline junkies, always looking for the next thrill. A lot of people base their ideas about climbing on the pictures and videos they’ve seen of climbers thousands of feet up, muscles bulging, and barely hanging on. Or worse, maybe they saw the beginning of Mission Impossible Two, where Tom Cruise is seen climbing with no rope and jumping along a perilous cliff face and don’t even get me started on the movie Cliff Hanger.

Anyway, without getting too sidetracked, the point I’m trying to make is that most people only get to see the very intense, adrenaline pumped part of rock climbing. What most people don’t know is just how relaxing a sport it is. I’m here to talk about this relaxing side. In order to do this, I think it’s best to break it up.

Now before I go any further, I think it’s important to disband some of the Hollywood perception of climbing and talk about safety. To understand the relaxing aspect of climbing it’s helpful to understand that climbers aren’t constantly putting their lives at risk. You might be asking, How safe can hanging off a cliff really be? Well I could go into all the technical aspects of climbing safety: the different styles of climbing, what rope is for this, or what knot is best and how different equipment after x amount of years needs to be replaced and so on. But, to try and talk about everything would require time that I don’t think either of us has. The thing to understand is that climbing has a very technical aspect to it with a huge emphasis on safety. Of course like in many activities, such as driving, the opportunity arises to completely ignore safety and procedure. However, for the large majority of climbers, being reckless while climbing is by in large frowned upon.

The atmosphere is probably the easiest part to understand about how a weekend rock climbing could be refreshing. First off, there is the location. It’s hard to find an ugly climbing spot. Mountains, canyons and other weird rock formation are what climbers live for. These places act as an escape from everyday life and allow you to enjoy the great outdoors. Furthermore, once you’re actually climbing you can experience some pretty amazing views. Along with an awesome location, odds are you’ll be with some pretty cool people since most climbing requires that you have a buddy. The culture that surrounds rock climbing is hard to summarize, but I can tell you from experience that it is incredibly welcoming. If you walk into any climbing gym, it nearly impossible to avoid having conversation with at least one person. Anyone who has gone camping or hiking can testify that it’s hard to be stressed out when you’re surrounded by nature and friends.

To explain what it actually feels like to climb is somewhat difficult. It might be best to disband another misconception which is that climbing is all about arm strength and how many pull-ups you can do. While this certainly helps, there is a lot more technique involved than people realize. While the best way to get better at climbing is, of course, more climbing, some people are surprised to learn that yoga is a great way to cross-train. This is because both yoga and climbing require a lot of concentration, breathing techniques and, you guessed it, the ability to relax. If you hang onto the rock with all of your might, then you will probably run out of energy pretty quickly. The ability to take deep breaths and calmly move from one hold to the next is what climbing is about. It’s not the easiest skill to master but the more you climb the better you will become. So maybe next time you’re feeling a little stressed out maybe you should go to a climbing gym. Who knows, you might discover a new favorite hobby.