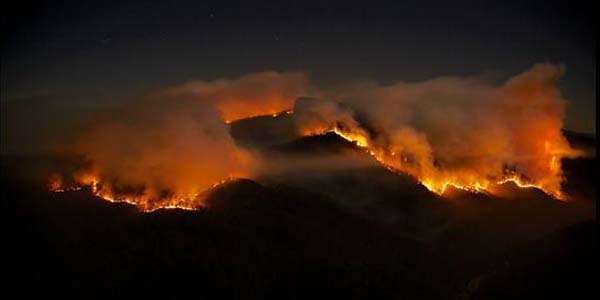 On the afternoon of Monday, November 11, a wildfire broke out in the Linville Gorge Wilderness area of the Grandfather Ranger District, Pisgah National Forest. Dry weather and strong winds were the perfect combinations for a 15-acre fire that started near the Table Rock picnic area. Since then, the fire has grown to cover 2,275 acres as of Saturday, November 16.

About 200 firefighters from 10 states, some as far away as Oklahoma, are battling the fire. So far, they have contained an estimated 40% of it. On Saturday, a third helicopter was brought in to join two others that have been dumping water on the blaze. The fire is threatening one home, but there have been no evacuations ordered so far.

However, this seemingly grim event may reap some good. Although the fire has devastated wildlife in the area, Forest Service biologists predict that the burns will restore threatened plant and tree species, as well as reduce dense vegetation that feeds wildfires. As long as no one gets hurt, no structures burn and the resulting fog caused by lingering smoke does not cause any accidents, the Forest Service says that the fire could actually have a positive impact on the area.

Meanwhile, visitors and residents have flocked to places like Wiseman’s View, which is directly across the gorge from Table Rock, to see the fire. David Huskins, the owner of Linville Falls Lodge, describes the view as a “continuous fireworks show” and a tremendous nighttime display. We encourage everyone who goes out there to view the fire to be extra careful out there, as Sunday night’s rain has reduced back roads to mud and left a heavy fog.

The cause of the fire is still under investigation. Anyone who has any substantial information regarding this investigation should contact Law Enforcement Officer Jason Crisp at (828) 442-2470 or the Grandfather Ranger District at (828) 652-2144.