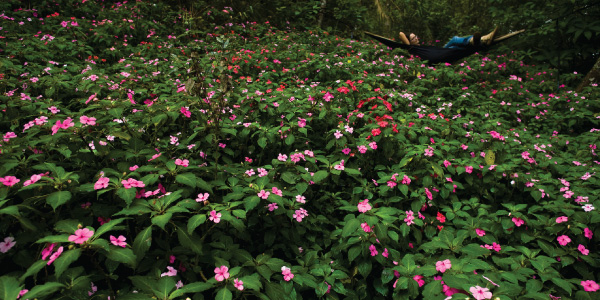 The Outdoor Gear Builders of Western North Carolina created as local companies ally to support and build the outdoor industry.

CAITLIN BYRD, Sep. 11, 2013 – As the beer industry boomed in Western North Carolina, business owners from another sector began to think, “If beer can do it, why not gear?”

“This area is such an outdoor mecca for individuals who love to go mountain biking and climbing and paddling and hiking. Everyone here is into the outdoors, so why can’t the manufacturers be into the area as well?” asks Eagle Nest Outfitters Marking Director Natalie DeRatt. “There are already a great number of manufacturers right here in our backyard. Hopefully by forming some kind of organized group, we can sort of band together.”

Citing the Asheville Brewers Alliance as a model, DeRatt says Eagle Nest Outfitters and SylvanSport, which manufactures outdoor hammocks and small pop-up campers, respectively, then looked to develop partnerships with other like-minded companies in the region this summer.

Initially, the two companies worked with fellow outdoor businesses to create a demo day for their gear along the French Broad. However, when faced with the reality of event planning from permitting to porta-potties, the informal group looked for another opportunity. In May, the Outdoor Gear Builders of Western North Carolina made its debut at the Mountain Sports Festival. Kyle Mundt, marketing director for SylvanSport, describes the alliance as a “win-win” for the region.

“We wanted to expose the fact that there is a pocket here on the eastern half of the country that is like Boulder and Salt Lake is to the west,” he says, noting that he and DeRatt identified close to 30 outdoor gear companies in the region.

Now the local alliance that began as a series of emails, boasts a new website and a membership of 11 local outdoor gear builders, including its two founding members Eagle Nest Outfitters and SylvanSport. However, it’s just the beginning for the local business alliance.

The group has been working with Noah Wilson, who serves as director of grants and special projects at AdvantageWest, a local nonprofit economic development group created to attract businesses to the mountains. Wilson says AdvantageWest has contributed $2,500 out of its own general operating budget for the creation of the Outdoor Gear Builders website. However, he says AdvantageWest sees this as money and time well-spent.

“This [alliance] is an example of a way to really leverage our time and expertise to help companies here grow and to help grow what makes sense in our region,” Wilson says, citing towns, such as Brevard, that are driven largely by outdoor tourism and could benefit from these businesses. However, in addition to attracting outdoor companies to the entire region, Wilson says that Outdoor Gear Builders also presents an opportunity to change how people view manufacturing in the mountains.

In July 2012, Legacy Paddlesports, which manufactures a range of watercraft and kayaks, relocated to Fletcher, N.C. As part of that relocation, the company brought between 40-50 new jobs with it. Legacy Paddlesports CEO Bill Medlin says being a member of the Outdoor Gear Builders allows for cross-collaboration between companies of all sizes.

“We all have different things. We’ve got our core expertise and then there are things we don’t know as much about. SylvanSport knows a lot more about aluminum fabrication than we do, but there’s some aluminum fabrication that we care about so we’re able to share some information. We know a lot more about plastics and all forms of molding, so we’re able to share that. There’s just a lot of cross-fertilization that can happen,” he shares.

Mundt echoes this sentiment, saying the collaborative spirit can be found throughout the outdoor industry and within the new alliance.

“What we’re bringing to each other is the ability to share resources. When you get 20 or 30 companies putting out press releases about something, it has much greater coverage. When the websites are all linked together, there’s huge SEO [search engine optimization] benefits. When a friend of somebody’s has outdoor experience and wants to move from California to the East Coast and needs a job, there’s 30 companies that can be sort of be plugged into that network.”

The goal, DeRatt says, is that as more companies find out about the Outdoor Gear Builders of Western North Carolina, the region’s attraction and economic impact will grow, too.

“We are really sort of the underdogs of where outdoor brands are traditionally located, but we’ve found that there are so many here that, why should that be the case? Why can’t we be the place where outdoor brands want to be?” she asks. “The more manufacturers we attract to the area, the more economically strong we’ll be, and hopefully we can naturally and organically grow.”

The Outdoor Gear Builders will meet again at the free grand opening of the Prestige Adventure Center, located at 585 Tunnel Road, on Saturday, Sept. 14, from 1 p.m. until 5 p.m.