Fall may have only just begun, but it’s about time to start planning winter trips. With many people hesitant to take the standard Caribbean winter escape due to Zika concerns, it’s time to start thinking outside the box when it comes to winter getaways. For the outdoorsy types who don’t mind foregoing a tropical beach-oriented vacation during the colder months, Colorado’s Rocky Mountain National Park surprisingly has a lot to offer.

Unless you’re an avid skier, it might seem like an unusual choice to travel to the Rockies during the winter, and there are definitely some drawbacks to visiting in the offseason. First of all, it’s not warm…at all. In January and February, the temperature will likely be in the 40’s, which is still better than some east coast cities, but by no means is it Punta Cana. That being said, chances are good that it will be sunny for the duration of your visit. Denver and the surrounding areas are well-known for being some of the sunniest places in the US. Also, unless you’re up in the mountains hiking, there will probably not be much snow on the ground compared to what you might see in other parts of the country.  You won’t have to trudge through deep snow down at the lower elevations, but you can still take in the spectacular views of the snow covered peaks above. The views in the park are amazing year-round, but there is something special about seeing these mountains when the peaks are covered in snow. 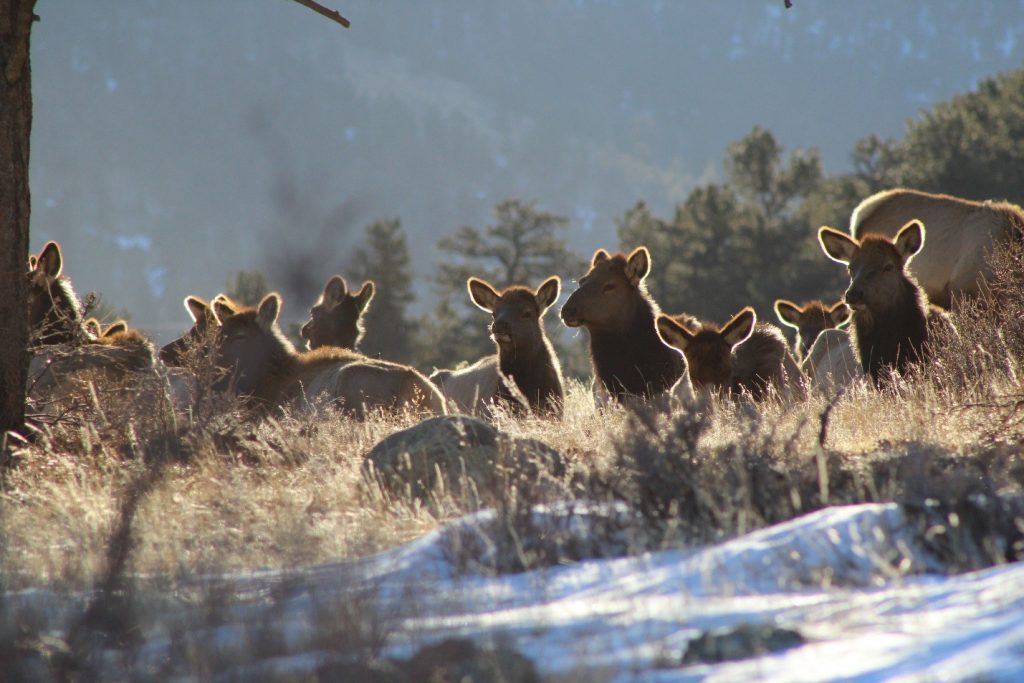 Since winter is considered the off-season for Rocky Mountain National Park, you will reap all of the benefits that come with offseason travel. For one, you definitely won’t have to deal with the large crowds that flood the park during the summer. Most mornings when we drove into the park, we didn’t pass more than one or two other vehicles during our early morning drives. Additionally, cabins in Estes Park will be very inexpensive and there won’t be long waits at any of the restaurants in town.  We rented a cabin off Airbnb right in the heart of Estes Park for a fraction of what it would have been during peak tourist season. The cabin was a five minute walk from the shops and restaurants in town and only a ten minute drive to the park entrance. There are plenty of good places to eat in town, particularly the Wapiti Pub and Claire’s on the Park. Also, you won’t have to deal with the big crowds of tourists pulled over to view the wildlife. There were multiple occasions where we parked our car to watch herds of elk both in town and in the park, and there were no other people in sight. 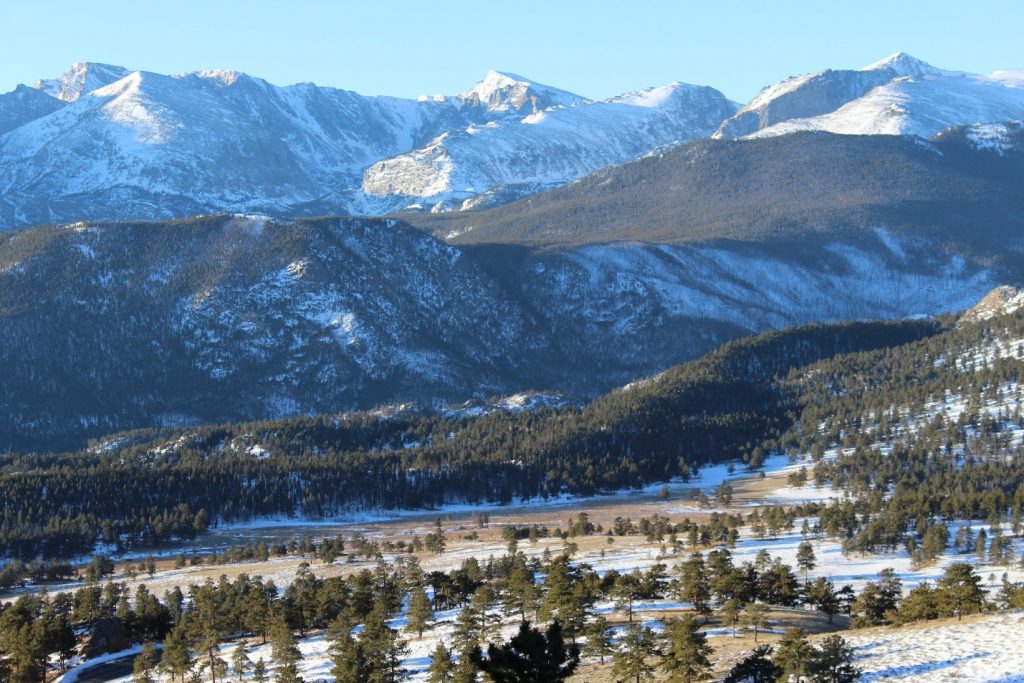 Rocky Mountain National Park has some incredible winter hiking and snowshoeing opportunities. The two best hikes in the winter are the Dream Lake Trail and Deer Mountain. Both can be done in a morning or afternoon and neither are terribly strenuous. Dream Lake offers amazing views of a series of high elevation frozen lakes as you ascend the trail which ends at Emerald Lake. This hike generally requires snowshoes or traction devices in the winter and there are a few good places in Estes Park where you can rent winter hiking gear for cheap. This trail can get crowded in the summer, but in winter, you will likely only have to share the views with a handful of other hikers. Not to mention, you can walk across the frozen lakes rather than observing the view from the shore. This was easily one of the most beautiful hikes we have ever done.  The other well-known winter hike in the park is Deer Mountain.  Deer Mountain is located close to the park entrance and provides stunning vistas of the surrounding mountains as well as the town of Estes Park.  This will also likely require traction devices for part of the trail, but the snow doesn’t usually get very deep on the side of the mountain that the trail ascends. The trail becomes difficult to see at times, so be sure to pay close attention to where you’re going.

If you’re willing to trade in the bathing suit for a down jacket, this is a surprisingly beautiful and relaxing winter trip. You might not be able to hang your ENO hammock between two swaying palm trees, but a couple of sturdy pines will do just fine. 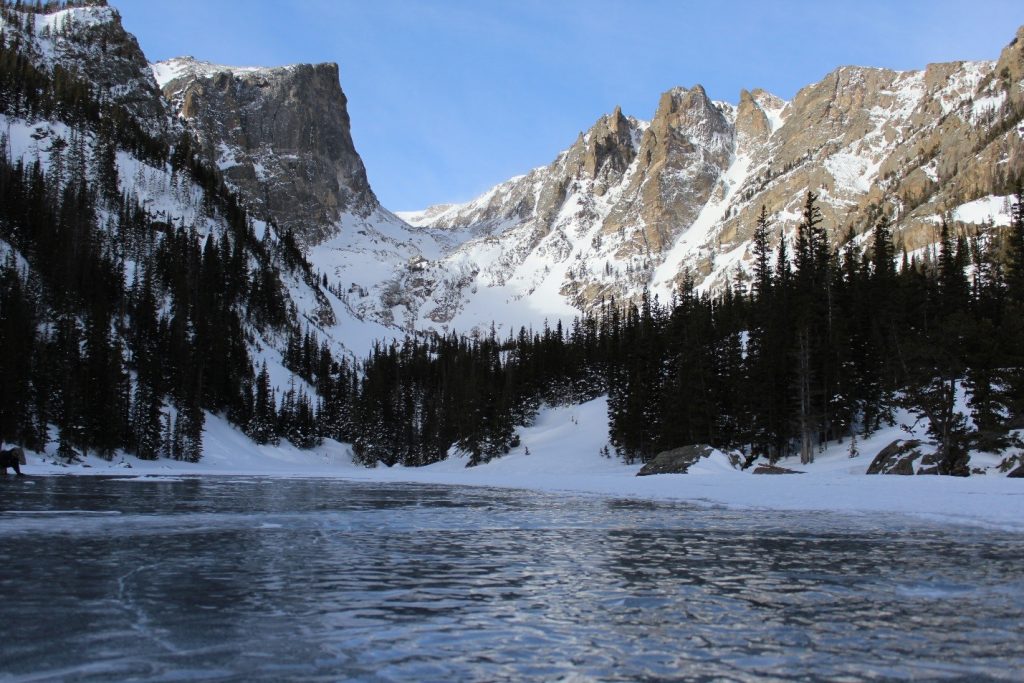 Trails Unblazed: We are Chris and Laura, a couple of lifelong New Englanders with penchant for adventure both domestic and international. Follow our travels at http://www.trailsunblazed.com